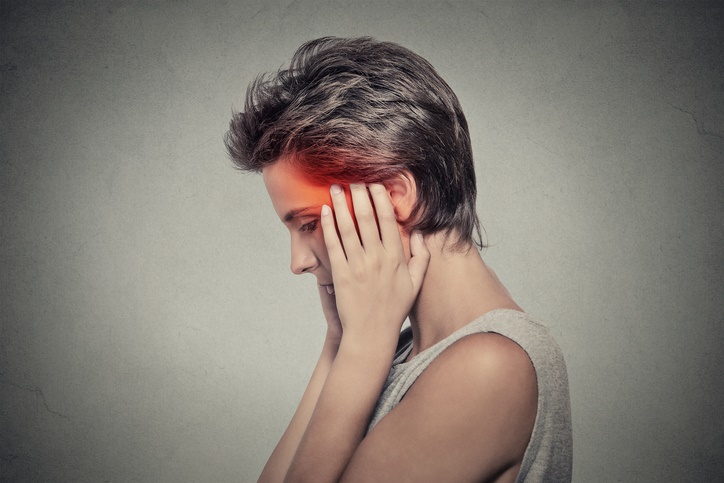 According to the Mayo Clinic, tinnitus is the sensation of hearing sound when no external sound is present. Instead, the sound is experienced internally. The symptoms are often described as a ringing or buzzing in the ears.

Tinnitus is a common problem, affecting about 20% of people. We typically don’t recognize tinnitus as a condition itself, but usually as a symptom of an underlying condition – such as an ear injury, hearing loss, or disease. Symptoms of tinnitus can worsen with age, especially if the underlying cause is left untreated. However, treatment can significantly help mask or reduce the sounds associated with tinnitus.

We tend to see people with hearing loss experience tinnitus the most. This is primarily because these individuals have difficulty hearing external sounds – resulting in a quieter environment. The less you hear externally, the more likely you are to focus on internal noise. Hearing loss amplifies internal noise – making the symptoms of tinnitus that much more bothersome.

When describing tinnitus to our patients, we tell them it’s something that occurs in the brain rather than the ear. However, if tinnitus occurs only on one side, we do advise individuals to get further testing to rule out any concerning medical issues that are actually ear-related.

Who is most likely to get tinnitus?

People who regularly experience loud noise exposure are the most likely to end up with tinnitus. Though typically tinnitus doesn’t occur without an underlying cause or condition, it can occur simply due to excessive noise – even in the absence of hearing loss. We see many individuals who served in the military or have jobs that are particularly noisy get treated for tinnitus. In these cases, the best way to prevent tinnitus is with hearing protection and simply avoiding really loud situations. Additionally, we see tinnitus in men more than we do women. This is likely due to the nature of the jobs that bring these individuals in to get their hearing tested.

What symptoms do individuals with tinnitus experience?

The sounds associated with tinnitus are called phantom noises – they might be described as:

Any noise experienced in the ear, especially in a quiet environment, is likely caused by tinnitus. One of the most common descriptions of tinnitus is a high frequency or high pitch sound in the ear. We’ve also heard it described as hearing a radio that’s just out of reach. The actual sounds heard vary from person to person, but the experience of hearing sound when no external sound is present is universal with tinnitus.

What should you do if you think you have tinnitus?

First and foremost, get your hearing tested. If hearing loss is contributing to your tinnitus, a hearing test will be able to tell you right away. As far as treatment protocols, there isn’t a cure for tinnitus, but there are ways of managing the symptoms. You don’t have to let the symptoms of tinnitus interfere with your life.

We also have a type of hearing aid that can mask sound. Even though this is essentially just replacing one sound with another, you’ll at least have control over the more prominent sound you’re hearing. With tinnitus, you don’t have any control over the sounds you hear. Maskers offer relief from that bothersome ringing or buzzing in your ears. You shouldn’t be kept up at night or constantly interrupted by your tinnitus symptoms.

What happens if tinnitus is left untreated?

Typically, tinnitus symptoms will worsen with age if left untreated. If you suspect you have tinnitus, it’s best to get your ears checked as tinnitus can indicate an underlying medical condition. We’ve seen many individuals with tinnitus end up getting diagnosed with an ear infection or Meniere’s disease.

Meniere’s disease is a disorder that affects the inner part of the ear – usually only in one ear. It’s known to cause vertigo, hearing problems, and a loud ringing in the ear. This ringing is usually what brings someone in suspecting tinnitus.

Both ear infections and Meniere’s disease can lead to severe tinnitus – in some cases, causing a growth on the auditory nerve. We call this an Acoustic Neuroma. If you’re experiencing symptoms of tinnitus in one ear only, get yourself checked as soon as possible. Your audiologist will be able to determine if an underlying medical condition is responsible for your symptoms.

Although bothersome, tinnitus is not necessarily a serious condition. If you suspect you have tinnitus or would like to learn more about the condition, give us a call! Stay tuned for our next blog post where we’ll be discussing hearing issues relating to kids.

The site information is for educational and informational purposes only and does not constitute medical advice. To receive personalized advice or treatment, schedule an appointment.

Questions?
Talk To Us.

Why wait? You don't have to live with hearing loss. Call Us Today
Call Us Find Us